skip to main | skip to sidebar

I can't believe it's been nearly a year since I last posted! I am currently in the midst of dissertation and essay writing for the last two weeks of my degree, but was inspired at the sight of my 117th follower! I thought I'd get back into the habit of posting with an easy topic – my favourite films. I haven't watched nearly enough from the thirties yet, but these are my favourites so far.

1. All of the Fred and Ginger films I couldn't possibly choose just one (there are 10 in total)! But if you haven't seen one yet, I'd start with Top Hat or The Gay Divorcee. Both Fred Astaire and Ginger Rogers are fantastic not only as dancers but as actors, their unique relationship of quarrels and competition overcome only by their electricity as dance partners. The films are enjoyable for their comedy, romance, and pure visual treat, not to mention the fabulous costumes!

2. Gone with the Wind An absolute classic of old Hollywood. Starring the dashing Clark Gable as Rhett Butler and beautiful Vivien Leigh as the unforgettable heroine Scarlett O'Hara, it was one of the most popular films of its era. Though it was released in 1939, it continued to be shown throughout the Second World War, testament to its power as escapism. A must see! I only watched this film recently, and absolutely loved it, I was laughing out loud the whole way through. A brilliant example of the quintissentially 1930s genre of the screwball comedy, starring the loveable Katherine Hepburn and Cary Grant. Also there is an equally loveable leopard in the film. Starring two of my favourite leading ladies, Ginger Rogers and Katherine Hepburn, Stage Door is the story of a group of young women attempting to make it as actresses. Rogers and Hepburn get off to a rough start, and the catty wordplay between the two is particularly watchable, though the supporting actresses could give them a run for their money! A classic example of the early 1930s 'show' musical, with choreography by Busby Berkeley, 42nd Street tracks a group of chorus girls through the rehearsal and first performance of the stage show of the same name. Starring Ruby Keeler in one of her classic ingenue roles, and featuring spectacular art deco dance numbers of syncopated women.
Posted by Celia Rose at 01:28 8 comments: I'm lacking blog inspiration, so apologies for another lazy outfit post!
Blouse: Vivien of Holloway / Skirt: Made myself / Shoes: Office
Posted by Celia Rose at 17:54 11 comments:

Just thought I'd post a pic of me with a fringe for future nostalgia's sake as I've decided to grow it out! It's a bit too 50s for me, when I prefer a 40s look really. I've finished my exams for the year so will hopefully have time for more blog posts soon
Posted by Celia Rose at 20:36 1 comment: Another outfit post, made the pinafore myself, blouse is from H+M, shoes from Schuh
Also got a fringe cut a couple of weeks ago, still not 100% sure about it!
Posted by Celia Rose at 21:25 10 comments:

Just a quick outfit post, I feel guilty I haven't updated for ages!!
Blouse I think is from the 80s, bought it on ebay. Made the skirt myself, love it to pieces! It has a nice pleat in the front and back but unfortunately it hasn't come out in the photo! Shoes are from Irregular Choice. I am loving the combination of black with bright colours at the moment!
Posted by Celia Rose at 17:28 8 comments: Dyed my hair black a couple of weeks ago, guess how many times I've been told I look like Dita von Teese?
Posted by Celia Rose at 13:22 8 comments: I've been scouring the web for some new shoes, and I have long had my suspicions that the late 30s & 1940s platform is the ultimate shoe. These pairs definitely confirm it! Celia Rose
I write about the things I love: featuring fashion inspiration, outfits, sewing projects, baking and all things 1930s and 1940s.
Tumblr / Twitter
Follow my blog with Bloglovin 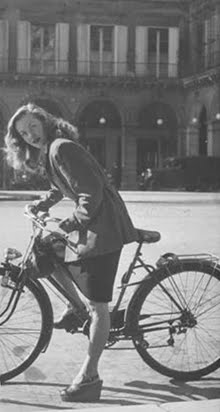